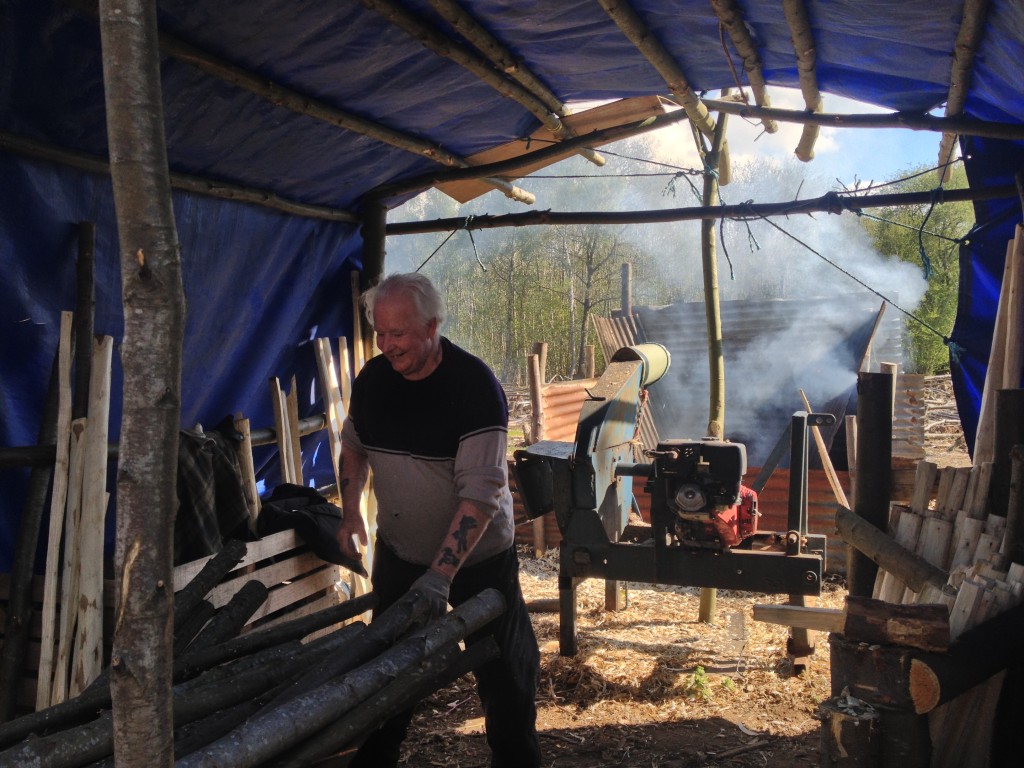 Who is the man in the woodland hut?  The coppicer,  Fred Pink, has been here for over forty years working alongside the woodsman, Ted, who has recently retired after fifty five years here.  Ted planted many of the specimen trees, including some of the first redwoods in the country.  Together they managed all the woods at Adhurst.

The coppiced plantation in these photographs is chestnut.  Coppicing means the young shoots forming at the base of the tree, or stand, are regularly cut back and harvested.  New shoots emerge from the cut stand and are then cut later in rotations of three, five, fifteen or even fifty years, depending on species and for what use the new growth will be needed.  These coppiced stands never die, unlike normal trees.

We can tell the age of stands of different species of tree by their diameter.  Next to the yurts is a hazlenut plantation.  It’s not managed now and has grown out but it was once coppiced.  We can tell that this was the old Victorian nuttery by the size of the stands.  To the other end of the yurts is a field called Broom Field.  It’s now coppiced chestnut but in Victorian times a shrub called Broom was harvested for broom brushes.  Now brooms are made from straw or synthetics so the trade died out and it’s now chestnut.  Another trade that died out is match sticks from the alder.  Again, plastic lighters have mainly replaced that.

The rest of Adhurst Wood is ancient woodland.  Ancient Woodland is defined as woods having existed since at least 1600.  It can be assumed that they are naturally occurring because woodlands were never planted before 1600.  The ancient wood at Adhurst is the third largest in Hampshire and is probably much older than we realise.  So, the secret of eternal life is intense management by coppicing or perhaps just leaving everything untouched!