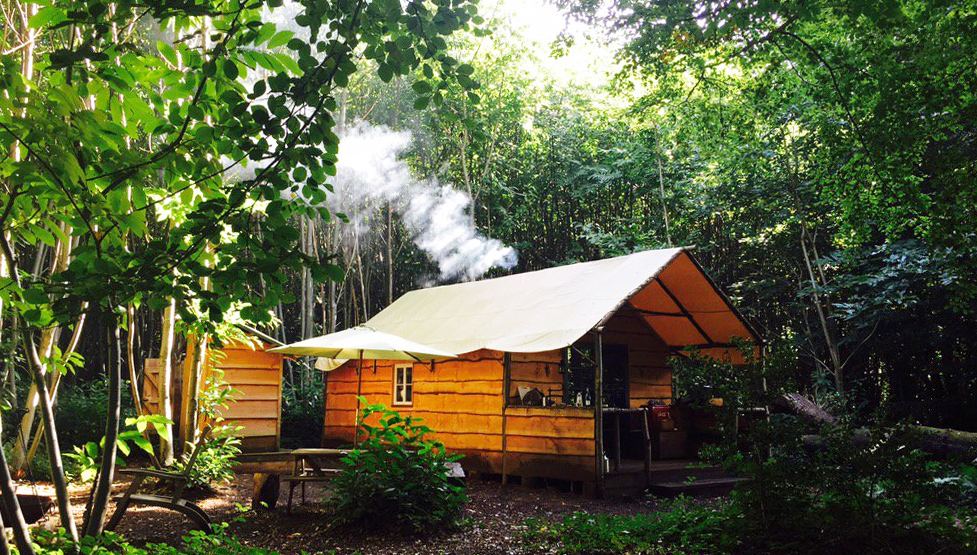 Adhurst’s only cabin.  When we built Coppicer’s Cabin from Adhurst timber we couldn’t decide between a tree house and a cabin.  We never reached a decision!  Instead we put a tree house INSIDE the cabin. We think we might be the first to do this!  At the foot of the double bedstead is a cherry tree for the children to climb to the upper sleeping deck.  The sleeping deck with futons is canvas-covered so it has the feeling of being in a tent – which is probably what the kids wanted anyway!  And if you feel the kids are on top of you, well, they are!  But in a nice way.  The cabin can sleep up to six – comprising two adults and four children.  If you are all adults it’s two in the double, one adult either side in a camp bed and two up top on the deck.  And the fifth and sixth adult are £40 extra.  The £40 includes a single futon for the single camp bed.

The Godin wood burner is cylindrical and was brought over from France.  You can fit in enough wood to ensure it burns slowly through the night.  Wood is always available at £20 for chopped and £15 for camp firewood – just place your order before 11am for same day delivery.

If you arrive in April you’ll probably be greeted by thousands of daffodils – and by May it’s covered in bluebells. In late September expect sweet chestnuts to roast.

And the reason it’s called Coppicer’s?  That’s because we were inspired to build it here by our coppicer.  Fred constructs a covered site protected from sun/rain for creating fence posts from the sweet chestnut coppicing at Adhurst. He moves his encampment from season to season depending which part of the coppiced woodland is due for management.  You can visit Fred most mornings deep in the coppiced woods at the top end of the estate – he’s always happy to explain all about coppicing and why we do it.

Our only space for a large breed dog “As each day gently dissipated into dusk the cabin would transform into a fairy-lit elfin world with the glow of the flickering flames and the twinkling tea lights. ”

The One named after our river